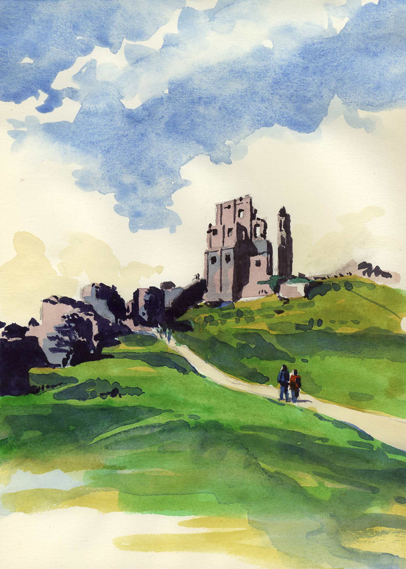 We are camping for the weekend at Corfe, with a little sketching by me. It would have been rude not to have gone to the Castle, whilst staying here.
Owned by the National Trust. In fact, we had to go back twice as ‘little R’ really enjoyed the archery that was being put on by a re-enactment group. After a little practice R was hitting the target in the red – with a little help from his tutor!

Corfe Castle was very interesting with several large sections of wall at various jaunty angles. A castle was first built here by the Saxons. However, William the Conqueror started to build the current castle and it was one of the first to built using stone. It was added to during the 12 & 13th Centuries. Much work was completed by Henry III and he had the castle whitewashed. It must have been a fine sight then.
In 1572 in passed from the Crown’s Ownership, to that of Sir Christopher Hatton. During the English Civil War the castle was under the ownership of Sir John Bankes. His wife Lady Mary Bankes, held out against two sieges by Parliamentarian forces, in 1643 & 1645. By the time of the second siege, the castle was one of the last remaining Royalist strongholds in Southern England. Lady Bankes was betrayed by one of her garrison’s officers, Colonel Pitman. Who smuggled in Parliamentarian soldiers into the castle. Once Corfe Castle had fallen Lady Bankes and the remains of the garrison were allowed to leave. Following the final siege the castle was ‘slighted‘, by order of Parliament. However, because of the solidity of the walls, it was impractical to completely demolish the castle. It was left in the state that we see it today.

Featured sketch above:
Watercolour ~ A5
The above sketch is looking up at the castle from near the entrance. Sitting in the grounds of the Castle.

I was using two sketch books here, an A5 Canson XL Croquis Spiral Pad & Daler Rowney, Langton 9 x 12” Hot Pressed watercolour pad. I was using Winsor & Newton, watercolour tubes of paint, with a palette. Three brushes, a large Pro Art no.20 and two smaller round brushes – sable no.6 & a no.1. Pens and pencils used are a black brush pen, waterproof fineliner and a 6B pencil.

Watercolour, black brush pen & fineliner.
This sketch is looking from the castle walls. I wanted to lead the eye along the path to the Castle Gate. Then through the village and up to the church. The castle has fine views over the surrounding countryside.

The next day we crossed the entrance of Poole Harbour from Studland to Sandbanks. Then caught the foot ferry to Brownsea Island. Which is again, in the care of the National Trust. We strolled over to a beach on the west coast to eat our lunch, before heading inland.
As I was a Scout in my younger days, it meant a surprising amount to me to be here. As this was were Baden-Powell held the first Brownsea Island Scout Camp in 1907. Which tested Baden-Powell’s ideas for starting the Scout movement and it feels like its spiritual home. I bought a Brownsea Island badge in the Scout Shop, a thing all good Scouts should have!

As we were heading back we saw one of the red squirrels that live on the island, that we had been trying to spot all day! 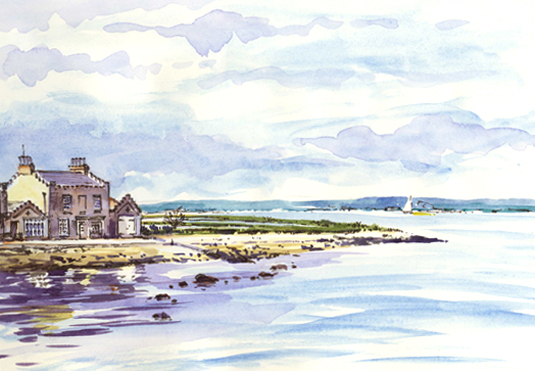 Watercolour and fineliner pen ~ A4.
From the quay looking to the eastern end of the island, where it breaks up into the wetland wildlife sanctuary and out across Poole Harbour.
Sold

Hello and welcome to Sketching Blog! My name is Nick Watton and I am passionate about art, painting, drawing and sketching.
Read More

By buying your art materials at Jackson’s (click on the picture above) you can help to support this Blog. It won’t cost you a penny extra. See also my Affiliate Disclosure page. Thanks so much!