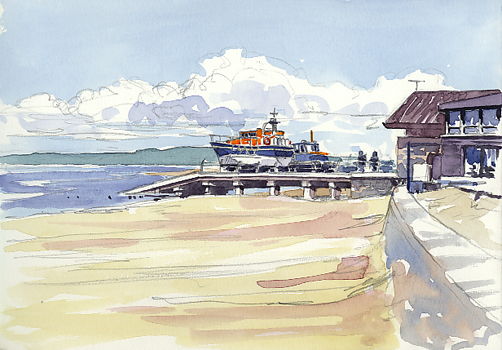 Back to Exmouth Beach

Sketching again on Exmouth beach. Generally I prefer the quieter Orcombe Point end of the beach. Or when it’s low tide I also like to walk around Orcombe Point and along the beach that joins to Sandy Bay.

My little boy is very into all things Dinosaur. So he loves the cliffs at Orcombe Point as this is the western end of the ‘Jurassic Coast‘ A Unesco World Heritage Site that stretches from Exmouth to Dorset. Exmouth has the oldest rocks, of the Triassic Period (250 million years ago.) The cliffs here are made up of layers of different sedimentary rocks. At the bottom of the cliffs, you can see the cross-bedded sandstone formed in a river current. However, towards the top of the cliff, it was a quieter water flow that was laying down layers of silt and mud. The cliffs are that distinctive Devon Red colour and show that when the sandstone was laid down in the Triassic Period that this was a desert environment. Fossils here are rare and difficult to find (much to my son’s disgust, but we still try!) However, there are plant fossils to be found and remains of amphibians such as the Rhynchosaur, that I sketched at the RAMM. He would definitely be pleased to find one of those!!!

Many of these sketches are from a period when the only way to get my baby son to have an afternoon nap, was to put him in the car and drive. Nothing else worked very well. So I would give him his lunch, make some sandwiches for myself and drive off somewhere. In this case to Exmouth beach. For these sketches, I was mostly using a small Winsor & Newton travelling watercolour set, two small round brushes (size 2 & 5) and a Daler-Rowney A5 cartridge pad.
The featured sketch above is:

Margaret Jean on the slip

May 6th, Watercolour ~ A5 After all the grey weather we have been having, today is sunny, but a bit chilly around the edges. The tide is nearly out and the little fella is enjoying looking for creatures in the rock pools. The lifeboat station is open to the public and their all-weather boat, the ‘Margaret Jean’ is out on the slip. Looking very purposeful. (She has now been replaced, by a Shannon Class lifeboat, ‘the R and J Welburn.’) 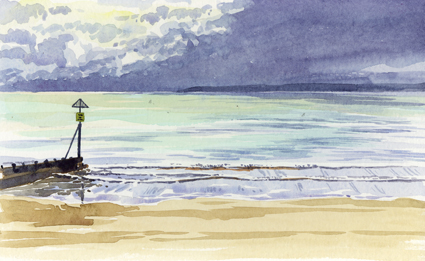 January 26th, Watercolour A5 A slight westerly breeze blowing down Exmouth Beach and a soft light playing on the sea. Black clouds are out on the horizon though. It’s an ebb tide with very small waves lapping on the shore. Very few people about. In short a very tranquil scene. 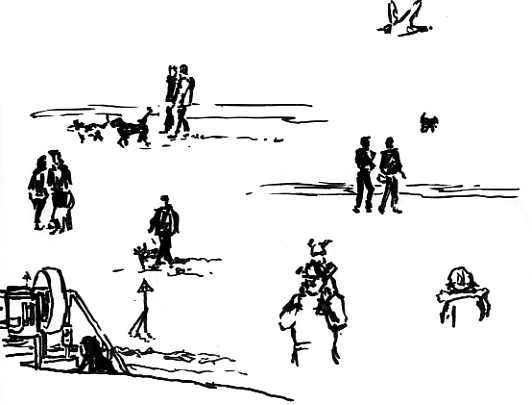 February 13th, Pen ~ A5 Some quick impressions of people walking past on the seafront at Exmouth. 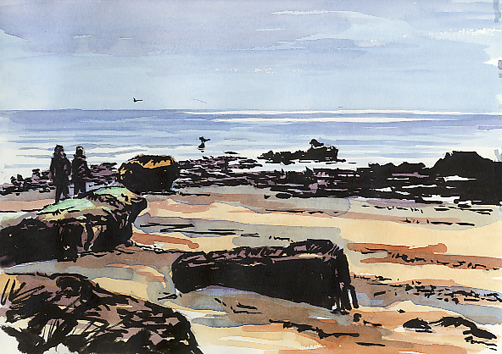 February 29th, Pen & Watercolour ~ A5 As the tide went out we strolled along to Orcombe Point. Our first day trip to the beach this year. Taking with us a picnic and all the other things that I can cram into or strap to the side of my rucksack. It was very sunny today, but as we neared the coast you could see the sea mist rolling in. When we got to Exmouth the sea mist came and went all day, but was never too thick or cold. Many birds were dabbling along the shoreline, Oystercatchers, two Geese, Crows and seagulls. 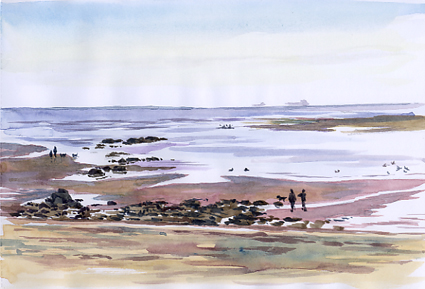 March 2nd, Watercolour ~ A5 Sketching at the east end of Exmouth beach. A bright spring-like day, with a very low tide. Lots of dog walkers, two canoeists, gulls and Oystercatchers. When the ‘little fella’ awoke we paddled, made sandcastles and met a surprisingly friendly whippet. 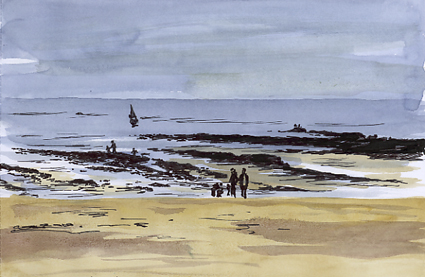 March 20th, Pen & Watercolour ~ A5 Very overcast day, but still quite busy on the beach. Sketching quickly, as I didn’t have much time. 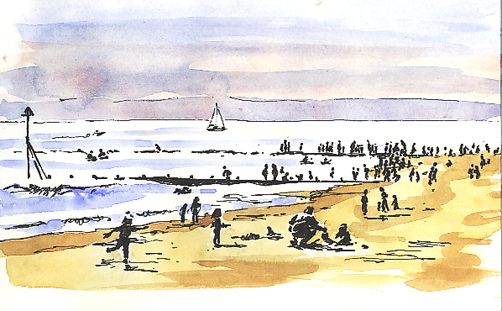 April 25th, Pen & Watercolour ~ A5 Meeting friends on the beach, it’s a sunny bank holiday, but hazey. Also the last day of the Summer Holidays. So, a lot of people about enjoying themselves, as you would expect. We had a great time, paddling and running from the bigger waves. As the tide slowly went out a queue of people formed on the long finger of the Maer Rocks, nearest to the Lifeboat Station. There are great rock pools to poke about in for wildlife. There always seems to be kids pulling out small crabs there and popping them into buckets. 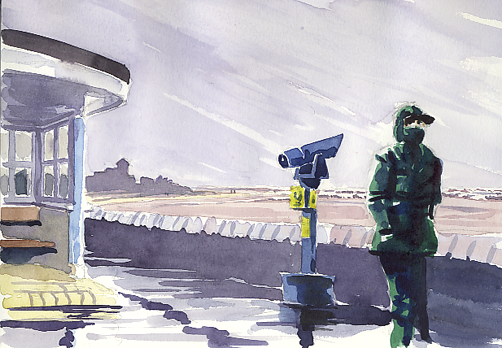 April 29th, Watercolour ~ A5 I have driven down to Exmouth seafront to watch the sea crashing in. Whilst I eat my sandwiches in the car, I’m also doing some sketching. One or two brave souls are out for a bracing walk along the seafront, all wrapped up in their waterproofs. Waves are breaking all along Pole Sands and Double Ledge and the sea is a dirty sandy colour. A night and, so far, a day of very wet weather with gale-force winds. 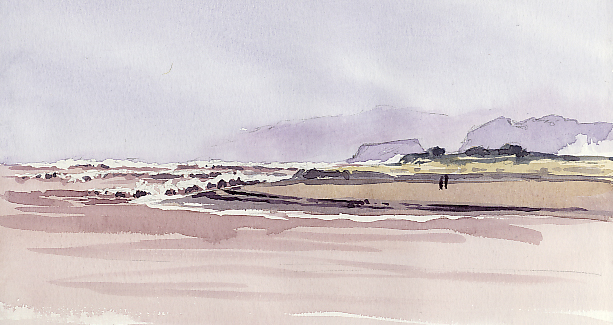 Continued from the above sketch. Watercolour ~ A5 This sketch is looking the other way towards Dawlish Warren. The breaking waves on the edge of Pole Sands, are being driven into the warren. 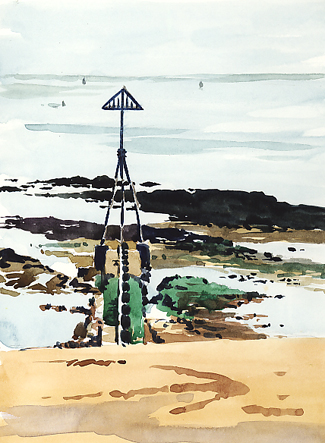 April 29th, Watercolour ~ A5 Grey overcast day with occasional showers blowing through. A few dog walkers strolling past, but not much else.

May 21st, Pen ~ A5 Hot sunny day. Lots of children playing and building sandcastles. With the sea softly lapping on the sand. Some little pen sketches of life on the beach. 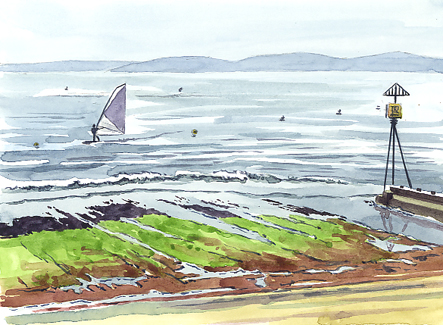 May 26th, Watercolour ~ A5 Slightly windy, sunny day. Not many people about – which is surprising. A few boats coming and going. Sketching a windsurfer who is enjoying himself zipping along the shoreline. 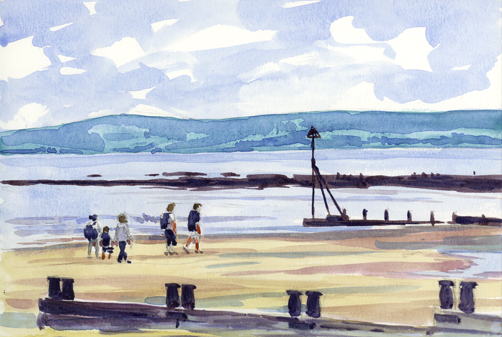 August 21st, Watercolour ~ A5 We spent the day on Exmouth beach today, warm & sunny but not too hot. The tide was just going out when we arrived and just starting to come back in when we left. The first thing we did was to build a T-Rex sand sculpture on the beach. It had lots of teeth made from mussel shells, which the ‘wee man’ was very pleased with. Also, rock pooling and caught several crabs in our bucket. Tapping out the last of the sand from the bucket, back at the car. A small escaping crab also dropped out! It scuttled straight under the car. I finally caught it, lying flat under the car. Popped him back into a rock pool. A much better place for a young crab to live than our car boot, methinks!

August 25th, Watercolour ~ A5 Parked at Orcombe Point. The tide is coming in pretty fast and with squally showers pushing in along the coast. However, it’s nice & warm and sunny in between showers. As the rain hits us the sea turns iron grey and the wind increases blowing in the waves. We make a retreat back to the car to finish our snack, before setting forth again – keeping one eye on the next shower heading up the coast! 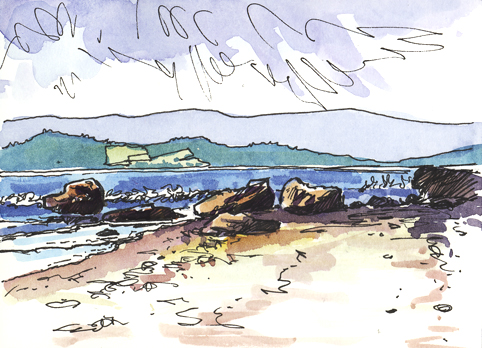 September 7th, Watercolour & Pen ~ A6 Great day today. The little fella and I set off for Exmouth beach with our picnic lunch. However, the weather was not looking too promising as we drove over and very windy. So on arrival, I set up the beach tent in the lee of some steps. With the tent tried to the handrail to stop it deforming. We then did our usual beachy things, with no one else on the beach! Sheltered in the tent for a cup of tea whilst a shower blew over. After lunch, the smallest member of the party wanted to head over to Orcombe Point to look for fossils(?) However, with the tide was coming in, we had to go via the cliff route. Down the steep steps, at Rodney Point, with the sea splashing below us. 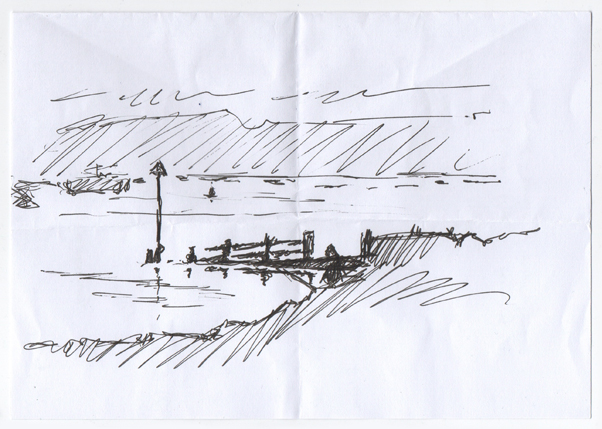 The Mouth of the Exe

October 12th, Pen ~ A5 Sitting on the sea wall sketching the mouth of the Exe as it is funnelled between Dawlish Warren and Exmouth. What a beautiful spot with the sun dipping behind the hill. I’m supposed to be thinking of something clever to say for a speech, I’m giving for the Exmouth Art Group’s Exhibition. However, I’ve got distracted by the scene and have drawn this on the back of my notes instead. A dog has just had a wee at my feet as I sit in my reverie. Ha Ha! 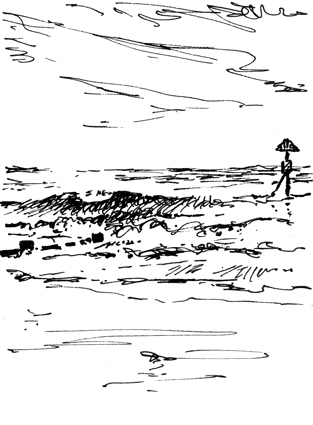 October 26th, Pen ~ A5 Another lovely morning spent on Exmouth beach, windy but still warm. With the waves of the ebbing tide crashing onto the beach. Built proper sandcastles today with moats (the ‘little fella’, now getting more interested in making them) and paddling in our wellies! Great fun for both of us.

Painting and Drawing around the Exe Estuary

Back to the Sketching Blog

We use cookies to ensure that we give you the best experience on our website. If you continue to use this site we will assume that you are happy with it.OkPrivacy policy